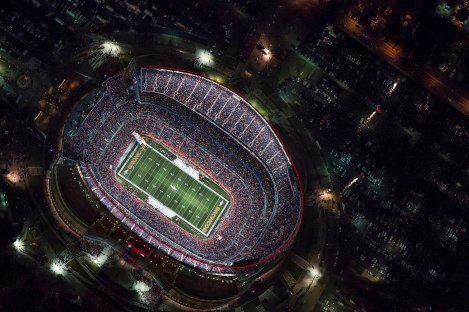 Oh, football. As many of you know (or could likely infer), I am one of the athletic indifferent. But when you live in a city with seven professional sports teams, you learn to accept sports as part of the culture while still maintaining a healthy distance. Unless of course family is in town.

Family has a way of getting you to do things you wouldn’t otherwise do. For instance, attending a Broncos preseason game. Granted, I fully recognize this as a privilege, but as the game itself didn’t hold my attention, I spent the hours observing my more immediate surroundings.

My first impression: Are we at the airport? Why does everyone just accept this invasive level of security?

There were wands, metal detectors, bag checks and locker assignments for those first-timers (or rebels) who like me had no idea you couldn’t so much as leaf through a program unless your possessions were clearly visible through transparent plastic.

Inside, I had an altered perspective of my beloved city. Looking up at the naked blue sky, I felt a distinct sensation that I’d fallen to the bottom of a giant well, or possibly a soup pot simmering on a stove while its inhabitants sat patiently in their designated seats unknowingly waiting to be boiled alive.

This undercurrent of nameless tension made for great people-watching—an activity so engrossing it occupied me all four quarters. I watched as my fellow humans morphed into a subspecies known as Sports Fan who stomped, wooted, and seat-danced to the arena music (which somehow included Rage Against the Machine; I won’t even get started on the ironies there).

Variations of Sports Fan include: the high fiver, the costume wearer, the body painted, the screamer, the slobbering drunk, the group of slobbering drunks, the good natured josher, and the other team’s fan who can take it as well as dish it just for the love of the debate. And often, many of these types overlap. Look out.

All around me ads flashed on Jumbotrons like a futuristic scene from literary dystopia, keeping the pleasure center engaged because without that, I presumed, under-stimulated fans might opt to finally punch out the Bronco mascot dancing amidst the cheerleaders who acted like it was the funniest shit they’d ever seen. (Place this same scenario in a bar. How would the outcome be different?)

Impression #5, or whatever: Also like air travel, sporting events are ridden with antsy ADHD folks who excuse themselves as they kick over your draught beer and smash the paper boats at your feet for the tenth time in under thirty minutes until you finally can’t take it anymore and become one of them, following the trail of discarded peanut shells to join the ranks for booze, food, and bathrooms.

The food: traditional American concession goodness or a conspiracy against the arteries? I’ll let you decide.

Final Impression: As night rose over the stadium, it created an odd contrast with the pixelated band of light below the skyline. I felt as though transposed to an open-air spaceship floating in the orbit of American consumerism entertainment—through the never ending swirl of one sporting season to the next—encapsulated for countless light years in football fandom psychosis.

Such an experience is great the first time, but after that there’s not much new to add to the story.