Nights in a Funeral Home 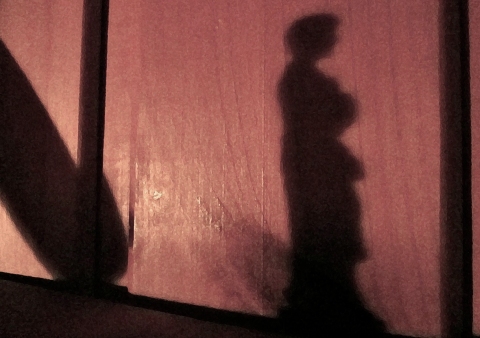 One weekend in college when my fiancé’s parents were away, we spent the time believing we were the only two in the house.

Picture this: a three-story funeral home south of downtown—small town middle America. Next door a church, one of three in what locals call the “Church Corners.”

We were in the funeral home, Derek and I, where he lived with his family in the top two stories. The house hadn’t seen a dead body in ages since the adjacent church took it over as their manse.

In the basement a rotting staircase led to nowhere and rust-colored stains made wide trails across the cement, concluding at a recessed drain.

Upstairs, above the garage, a floral area rug concealed the seams of the coffin elevator—still in working order. Counting the elevator, that made four ways of getting up into the first occupied level of the house. Ways that we’d until that weekend taken for granted were secure.

Derek’s parents came home Sunday night and noticed lights on in the basement. They asked about them. We hadn’t been down. Downstairs Derek’s dad found signs of an intruder—a backpack and some snubbed-out cigarettes.

Missing: two beers and a cup holder’s worth of quarters from their unlocked van in the garage.

Vandalized: a carved wood pillar on the main level reading, “Who’s the wolf in sheep’s clothing? Check the pastor’s fridge” in Sharpie—this inciting a laugh from Derek’s dad, sober for two decades.

Through the night and into the next day, no sign of the intruder until Derek and I, with a friend, pulled into the driveway after dark. While we sat in the car talking, a dirty, disheveled twenty-something walked across the yard and in through the front door. In the car the three of us exchanged glances, positive we’d just seen our unwelcome guest. Leaving me behind, Derek and our friend went inside to confront the guy. A phone call to the police identified him as a vagrant making a tour of the Midwest in avoidance of an arrest warrant. He was wigged out of his mind, they told me later, after nervously driving him to the police station. The vagrant had told them a story about hearing that the house next to the church was a shelter. Which of course explained why he was hiding out in a cold unfinished basement where an undertaker’s tools had formerly been at work.

I shivered. What would’ve happened if he’d taken one of the staircases to the top of the house? Maybe he had? Just missing us walking from bedroom to bathroom. Just missing us coming or going.

That night I helped lock the doors. And every night since, the twist of a lock and the slide of a chain have become as habitual as turning off lights before bed.