I’m resisting my urge to hug everyone whose costume makes me break out in a big giddy grin.

So far I haven’t been impaled by a single wand, sword, horn, or light saber. Seems like an accomplishment.

Can I go home yet?

Why is my panel still so far away?

There’s a T Rex walking through the food court whose legs are too short to run.

A giant yellow exclamation point hovers over a girl’s head in the donut line.

A nerd couple starts making a board game at my lunch table. I get up and leave. 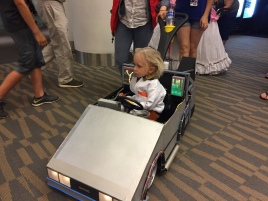 Sherlock Holmes asks to take a picture with me. I say, “Sure, Sherlock.” I’m not even dressed as a character, just all blue—hair, eyelashes, earrings, shirt, shoes—a depiction of my disposition.

My head feels about to explode from the pressure of this wig, which I redo in the ladies’ bathroom, no shame, I’m not the only one.

So many redheads in one place, and on a day when I don’t identify as a redhead. I am only playing an identity. This is a crowd I don’t stand out in, natural red or synthetic blue.

Who I think is the same girl for a while turns out is just a popular costume.

I ride the escalator in high heels; make eyes with the Queen of Hearts; do not slip and create a toppling human row of dominos.

God love these people who trek for miles in giant robot shoes.

There’s a kid actually dressed as a fidget spinner.

I pass Wesley the Dread Pirate Roberts in the crowd and I genuinely debate whether to follow him around (major Cary Elwes crush back in the day).

I still plan to find him.

Didn’t cross my mind that Harry Potter would be a part of the Con. I may not be into super heroes but I love me some Houses and Charms.

The line to see the Weasley twins stretches for blocks (if we were outdoors). Damn those identical redheads, I’d get in that line too if my panel weren’t in half an hour. That’s at least a thousand guaranteed people not coming to see me.